I used the following method to upgrade my Sky+ HDD:

After first time experimenting with upgrading Sky+ Pace TDS470N HDD the hard way, this time, I've decided to do some research on the Internet with the following links:

Firstly, I just put Sky+ in standby mode, disconnect all the wires including the power cable. The way I did in this exact order as follows:

Without making any changes to my default settings:
Now that Sky+ box is out of the way, I've switch off my old self upgraded e-Machines 320 PC - purchased from way back in Friday 31st August 2001 but delivered to me on Sunday 16th September 2001 with maximum of 512MB RAM, Maxtor 6B200PO DiamondMax 10 200GB HDD containing Multi-Boot Operating Systems Facility with Microsoft Windows 98SE (C:\), Microsoft Windows 2000 Professional (D:\), Microsoft Windows 2000 Server (E:\), Microsoft Windows 2003 Server, Enterprise (F:\) & Microsoft Windows XP Professional SP2 (G:\) while drive H is reserved for Windows Vista, running at 900MHz Intel Celeron Processor 66/100MHz bus speed. Even its not the fastest by today's standards, disconnecting all the cables including power supply, monitor, etc and then I opened up the case with ease by removing the 3 small screws and sliding it out towards me. 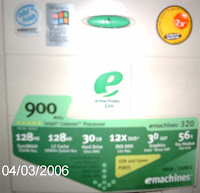 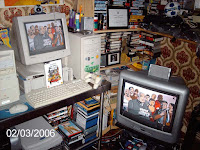 As the IDE cable is not long enough, so I had to use a pile of books as a stand for my HDDs right next to my PC, putting one CD case on top of the pile for existing 200GB Sky+ HDD and then put another CD case on top of the Sky+ HDD for the new 300GB HDD, connecting both HDDs with default CS (Cable Select) jumper setting in that following order: 200GB HDD = Slave & 300GB = Master.

Switch on my PC and then proceed to use Copy+ software, performing a Disk copy directly from existing Maxtor 6B200PO DiamondMax 10 200GB HDD (Source) to new Maxtor 6L300RO DiamondMax 10 300GB HDD (Destination), here are some of the following screen shots as shown below. 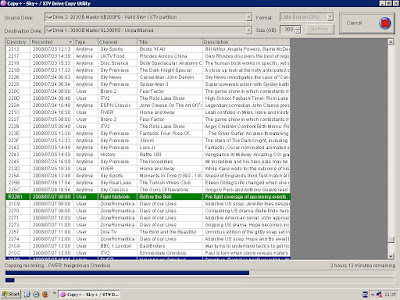 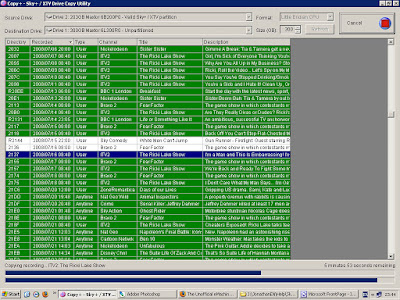 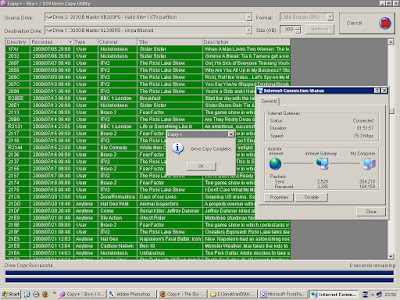 After a total copying process time of 2 hrs & 16mins later from 23% free out of 200GB, including Sky Anytime TV data onto 300GB HDD, I just do everything in reverse including returning copied 300GB HDD to my Sky+ box, refitting the case and screws back and do in this order to power up my Sky+ box as follows:
Wait for 2 mins, during that time, no matter of many key presses on the remote control won't make any effect to turn your Sky+ box to turn to green light. After 2 mins is up, press the Sky key on the remote control. Perform "Sky+ Planner Rebuild", in order to do that, press Services, 4, 0, 1, Select. Then press 7 to select "Sky+ Planner Rebuild" option to start the Housekeeping task.

Hey pesto, it worked!! Now I can start enjoying with my new upgraded Sky+ 300GB HDD!!!

Posted by Jonathan Erskine-Nartey at 11:00